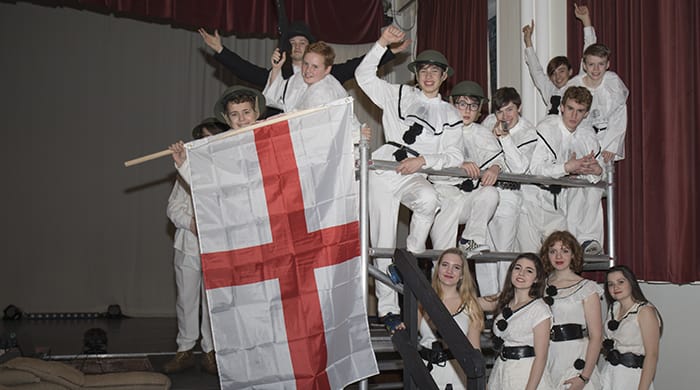 Pupils at Elizabeth College have staged a memorable production of Oh What a Lovely War! An epic musical and satire on the First World War – and war in general – originally developed by Joan Littlewood’s Theatre Workshop in 1963.

For three sold-out nights, the School Hall was decked in camouflage and sand bags, as a 24-strong cast, including pupils from Ladies College,  brought the musical to life for an audience of parents, friends, staff and supporters of the School.

From the opening scene the cast, crew and band were abuzz with energy, producing an exciting, colourful and seamless show, complete with well-known tunes like ‘Keep The Home Fires Burning’, ‘It’s A Long Way To Tipperary’, and ‘Pack Up Your Troubles’.

Nikki Brown, Head of Drama at Elizabeth College, who directed the production, said: “There was a great energy about the performance – it was clear that all the pupils involved were really enjoying the experience. The principal performances were all terrific, but this was very much a team effort on the part of all the pupils and staff. It was a privilege to perform the play to coincide with the centenary of the end of the First World War, and to honour and pay respect to the 112 OEs who fought and lost their lives as a result of the conflict.”

The play was devised as a piece of theatre that will have the audience laughing one minute then crying the next as they are forced to ask the question: do we ever learn anything from war?