Another great athletics season culminated in gold for Alastair Chalmers!

Alastair won the 80m sprint hurdles, breaking his own personal best and Island record in the process to claim gold. This performance earned him second place in the national rankings.

At under 15 level, a  personal best from Toby Glass in the 800m saw him placed fourth. At under 17 level, Barney Lawson came sixth in the heats for both the 100m and 200m. Daniel Galpin also competed in the under 17 steeplechase.

To read the Guernsey Press article, click on the image below: 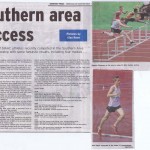