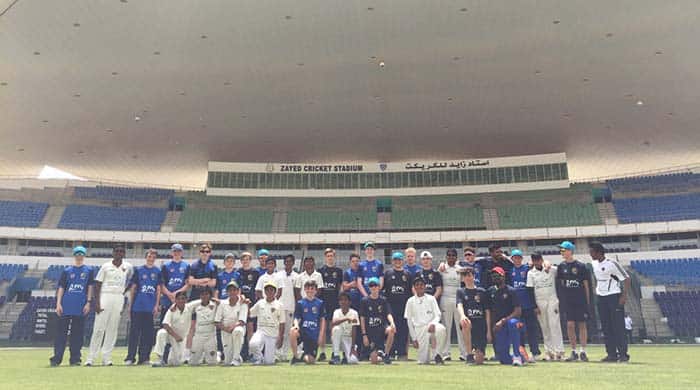 I made my way down to the Ferry Terminal at the harbour making sure that I had packed all the essentials for this once in a life time experience. We all said our farewells to our parents as we embarked on this nine-night trip to 30 degrees heat. The atmosphere in the terminal was very positive mainly due to amazing schedule Mr Eisenhuth had put together for the entirety of the week! We set of onto the Commodore Clipper with one slight worry after Josh Saunders couldn’t find his ticket but luckily the staff were very lenient and let him onboard the boat. After boarding onto the boat, we saw the familiar faces of Mr Wray and his wife who were also travelling of the rock. Everybody got into their seats in the lounge and made the most of the included tea, coffee and “choco milk” making facilities! The chocolate milk as it is usually named tasted very good and I found myself going up for glasses one after another. After stuffing ourselves full of sugar and ginger biscuits everyone found a comfortable place to settle down in for the night. Myself, Joe Cashin and Peter Birch made the most of the reasonably large space under the chairs and wrapped ourselves up in blankets ready to get some rest for what was going to be a very busy following day!

The captain sounded early at dawn and I remember everybody waking up and then falling straight back to sleep again. After having a few hours under the blankets, we all packed our belongings together and set of up to the restaurant where we had to wait for a car to come and take us to the Portsmouth Ferry Terminal. Many people asked why we had to get in a car as it would be much easier to walk but they replied saying “It’s for health and safety reasons” much to everyone’s disappointment. Arriving in the terminal, everybody spotted the nearest Costa Coffee where we stocked up on paninis, milkshakes and smoothies at only 8:00am! Our National Express Bus arrived shortly afterwards, and we took our bags on excited by the prospect of having Wi-Fi on the bus. Many people read and played games on their phone to make the coach journey seem much less tedious.

We arrived in London Heathrow just after midday and made a base for all of our belongings which Mr Connoly, also accompanying us, kindly looked after as we began our search for food in the four terminals yet again finding another Costa! After checking in our bags and going through security with no hassle, it was finally time to relax as we knew how close we were to sunny weather. We boarded an Etihad a380 which for any of your plane enthusiasts like me cannot land in Guernsey! It was gigantic compared to the sized of Joey and his fellow propeller planes. We began our final leg of travelling to Abu Dhabi on a six hour flight which flew by after everyone found out the choices of films!

Walking of the plane to such heat was quite a surprise to many. We exited the airport and boarded the most refreshing air conditioned bus to our apartments in Dubai. Driving there was amazing and decided to stay awake for a little while so that I could see the amazing architectures of the Burj Khalifa and Burj Al Arab also known as the world’s third highest hotel. We arrived in our apartments and in our training shorts jumped straight in the pool! The view from the pool area was incredible and slightly daunting considering how it was on the sixth floor of a 49-floor building. After an amazing lunch at a local fast food chain we departed the hotel heading towards the ICC in Dubai for net training! I loved training on the different wickets as I could practice different bowling techniques. Mr Eisenhuth, Mr Connoly and John helped every one of us improve by telling each person tips that they could personally work on. Mr Eisenhuth even gave me an eye patch so that I could practice batting with one eye! We ended the day by making Tagliatelle in our room which tasted delicious after a busy day of sport in the sweltering temperatures. Day one in Dubai was over and the excitement had only just begun.

The breakfast in the Al Salam Apartments was incredible, and everybody’s plate was filled with pancakes dripping in maple syrup! Sausages, Turkey Bacon, Doughnuts and a selection of juices were the least they had to offer. Not many people touched the fruit section for the entirety of the trip. Everybody packed their bathers and we set of to the Aquaventure Waterpark at Atlantis for the day which was incredible. Most of went on all of the rides they head to offer except one which only a few went on not including me! Many of us would have gone on the ride where the floor drops but we were too light. After knowing what the consequences were of being too light and going down the slide, we decided that the weighing scale was correct. Not one person did not enjoy the water park and even if you did not like football, everybody played on the beach! We left the Waterpark very tired and arrived back at hotel to pizzas which Mr Eisenhuth had bought as from the shop. It was our rooms responsibility to cook them for the seven of us, so we made sure that they were cooked properly! Shortly afterwards we boarded our coach for the Dubai Mall where we were greeted by a gigantic fish tank full of colourful fish and around 8 sharks! It was a great experience seeing hundreds of big branded shops all together in one gigantic mall. The sweet shop proved very popular except the prices put many people of one being myself!

Our first game begun against Hampton in the U15 Arch Cup which begun very well after we kept them down to a very good total when fielding. After a slight spell of wides and missed catches they ran away with a chase able but difficult total to catch up with. Every player on the field put in every effort they could possibly give and if it wasn’t for our first game in the sweltering temperatures we would have had a very good chance of a victory. We played 5 matches in the days following against the English schools of Epsom and My Cricket Professional Academy. The local teams of the Zayed Academy and Al Ethihad Academy also played against us. Even though we lost our games it did not impact the once in a life time trip one little bit. Everybody played equally thanks to the brilliant organisation of our coaches enabling us all to play on pitches we might not ever get to play on again. The atmosphere around the field was also superb and if you bowled a wide or got out our encouraging team made the situation much better.

Cycling around the Yas Formula 1 circuit was also incredible and an experience I’m sure we will all remember for the rest of our lives. After three laps ours legs were all aching bad but at least we had burnt of the calories from the burger we had just devoured in Johnny Rockets an hour before! The Yas Mall excursion was also amazing as we all saw a different culture as soon as we walked of the coach. Local shop vendors were tempting you to come and look in their shop as they had the “better” quality products compared to the shop next door. I heard that excuse many times as they wanted you to think that their product was one of a kind even though you could easily find it for cheaper in the smaller shop next door! Myself, Peter Birch, Toby Storer, Seb Vance, Jake Swaisland, Jake Williams and Ronny Hallett all bought a pair of fake yeezys shoes which looked very realistic. Usually they cost a fortune but we all got pretty good bargains in dihram, mostly equivalent to £30. They cost around £500 or more to buy new from adidas! I also enjoyed visiting the largest Mosque in the United Arab Emirates during our stay in the Marriott in Abu Dhabi. It was incredible looking at the architecture finished recently in 2004. Staying at the Marriott Hotel amazed us all mainly because of the glass panel in the bathroom. We made sure that the blind was shut when each person used the bathroom! Games of hide and seek in the pool were also a huge hit, which even John and Mr Connoly joined in with.

Mr Eisenhuth organised a very special last meal and award presentation on the decking outside the restaurant. After stuffing ourselves with hot dogs (in a pancake!), chicken nuggets, chips and a coke, we all sat down for the golden duck prizes. We won a doughnut to represent the amount of runs we had achieved, zero for us all! It tasted very good and was a very nice gift after getting out first ball, like myself. After a sad but fun last night in the hotel we packed our bags and set our alarms for a 4:00am start the next morning! Travelling back was very grueling at such an early time in the morning but we all remembered the great memories we had created on the trip. I would like to thank Mr Eisenhuth on behalf of us boys for organising this superb trip which exceeded every one of our expectations. Mr Eisenhuth, Mr Connoly’s and John’s charisma and enthusiasm towards the trip made it even more enjoyable and I’m sure us boys would like to go back any day of the week! The trip was an amazing memory and if you ever get the chance to go, take it because you may never get an experience like it again.