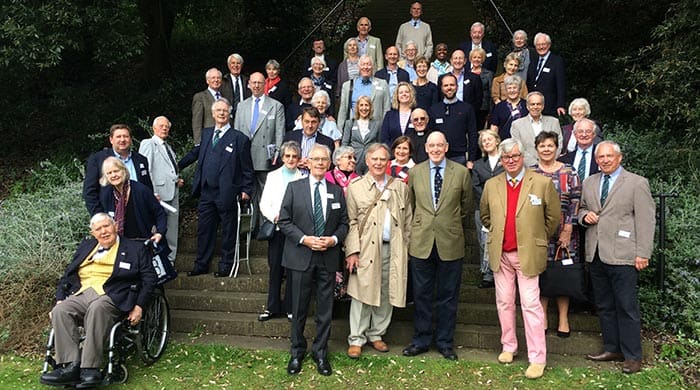 At the latest UK event for the Dead Donkey Club nearly fifty Old Elizabethans and their partners were guests at one of Oxford’s oldest and most prestigious establishments, New College.

The Guernsey party spent the morning being given specially arranged tours of Oxford’s Bodleian Library. The Warden of New College, Miles Young, hosted the OEs with both a tea and a drinks reception and all were welcomed to Evensong in the much-acclaimed College chapel.

In a tour of the gardens and buildings, the Warden was keen to point out where numerous Harry Potter scenes were filmed including ‘Hogwart’s Hall’ and ‘Hogwart’s Cloisters’!

The Chairman of the College Foundation, Bruce Parker, presented the warden with a copy of The History of Elizabeth College and Alan Cross, former College Vice-Principal and New College student who arranged the visit, presented Mr Young with a plaque of the Elizabeth College coat of arms.

The current Principal of Elizabeth College, Jenny Palmer, was among the guests as was a former Principal, John Doulton.