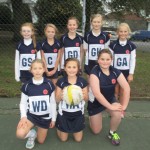 The ‘A’ Team impressed and kept us on tenterhooks in their first netball tournament of the year. It was a shame that the rain brought the event to an abrupt end, however, while we were in winning ways in some ‘nail-biting’ matches!

In our first game we met St Martin’s, unfamiliar opponents. We were head-to-head for the whole game but managed to snatch one more goal in the last minute. It finished 4-3.
Hautes Capelles, another unfamiliar team to us, proved to be tough opponents. However, our defence was so fierce that we did not allow them to score, and vice versa, with the match finishing 0-0.
With playing La Mare De Carteret only last week and having begun to warm-up, we were feeling even more confident to maintain an unbeaten run. It was not plain sailing though, but with our drive to win, we finished our third 8 minute game winning 4-3.
It was a shame that the rain set in and cancelled our last three matches against Amherst, Vale and Castel but we will hope for a rearranged date.