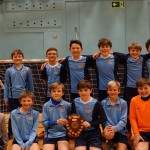 In this year’s Guernsey Junior Schools FA 5 A Side tournament, ECJS Beechwood won both the A and B sections of the tournament, remaining unbeaten throughout both tournaments.  The boys competed in A and B team competitions against five other schools, Castel, Hautes Capelles, La Houguette, St Martin’s and Vale.

The A team’s results over the five games consisted of wins against St Martin’s, Hautes Capelles and Castel and draws in their matches with La Hougette and Vale. As the final whistle went, the boys did not know if that had been enough to win overall.

The B team went one better with wins over all but Hautes Capelles who, just as they did in the 6 a-side tournament, scored a very late goal to equalise. This would be the B team’s only draw and the boys knew that as their last game finished, they were the only unbeaten team and had won their section.

We gathered for the final results with all the other teams and waited to see how the A team had fared and, slowly but surely it became evident that the A team were going to be at the top. Mr Sargent finally confirmed they had finished top of the A section and, with the B Team also winning overall, ECJS Beechwood had won the lot!

Well done to all the boys who played, all the parents who supported, Mr Sargent for his organisation and coaching and Mr Sutton for being B team coach.