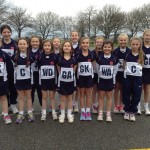 To kickstart the New Year, our netball team made a visit to Blanchelande; a trip which finished in great success for our girls.

It was fortunate that both teams were fit enough to keep going for the four 8-minute quarters because, due to illness, we were without substitutes.

The ‘A’ team performed as the stronger side, especially with Blanchelande missing a couple of key players, including their shooters. However, despite them being the taller team, Beechwood were more alert, agile and hungry for the ball. The shooting duo of Poppy Preston and Abigail Roger were able to convert the hard work of their team to an 8-0 lead by half-time.

Without substitutes, the second half became more of a challenge but even with a switch of positions to gain more experience in different areas of the court, the girls still won convincingly with a 12-4 win.

The ‘B’ team also gained some valuable experience while playing against a significantly taller team. The teams were drawing 1-1 at half-time. The girls managed to deny Blanchelande a  chance to score further with their increased feisty defending but were unable to score themselves, finishing in a 1-1 draw. Well done Team Beechwood!