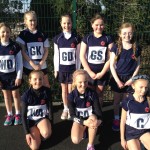 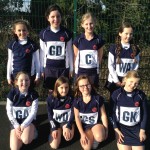 We were faced with an experienced Cheltenham side in our first games and consequently the ‘As’ lost 7-1 and the Bs lost 2-0.

We were more evenly matched in our second games against Melrose. The ‘As’ began with some strong passing and good, solid defending. The Melrose defenders were tall and difficult to score against in our ‘D’. However, by half-time, Poppy Preston had scored two goals to their one.

In the second half, we started to feel the pressure, as Melrose equalised and followed with a good run of three more goals. Scoring was still hard, against their tall defence, and the game finished 5-3 to Melrose.

The ‘Bs’ had a great first half against Melrose, making it difficult for them to score with some excellent quick hands of Carys Evans and Anna Ensink. Attacking was tricky for us, but our defence and centre court demonstrated some impressive bounce passes to surpass the tall Melrose defence.

At half-time, we were losing 2-0, but the height of the opposition proved more and more difficult to overcome and the game finished 6-1.

Well done, girls! With more netball experience under our belt, we are now ready for the Island Netball ‘A’ Team Tournament.