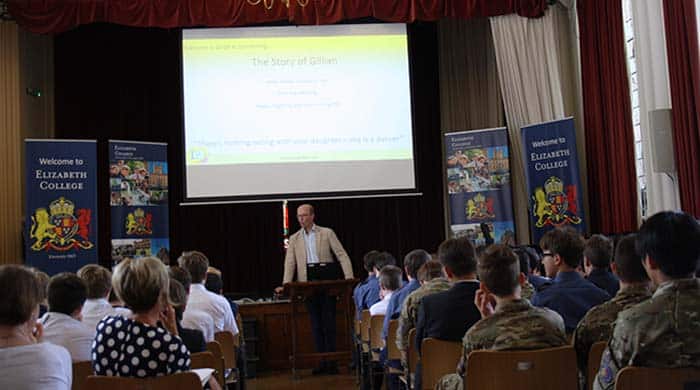 Elizabeth College was delighted that James Shone, an inspirational speaker who delivered a Principal’s Lecture 3 years ago, returned to College last week to speak with pupils and parents.

James is the founder of charity ‘I Can & I Am’ which aims to inspire confidence in every individual and enable them to get to know who they are and what they are able to do, rather than focusing on what they can’t.

Following a sixteen year career in several boarding schools and being a housemaster for twelve of those years, James Shone was appointed as headmaster to Monkton Prep School in 2012. During his medical assessment a brain tumour was discovered. Over the coming months James underwent two massive operations spending 11 weeks in hospital; the operations saved his life but took most of his sight.

James is a man who embodies a positive attitude to life and a determination to turn setbacks into springboards. As a housemaster, this was at the heart of his pastoral message but it is now fundamentally important that he lives this message out everyday himself as well as sharing it with a wider audience.

Jon Shaw, Vice-Principal Pastoral at Elizabeth College, said: “James has a truly remarkable story and is certainly one of the most inspiring and challenging speakers I have ever heard.”

To read the article that appeared in the Guernsey Press please click here.