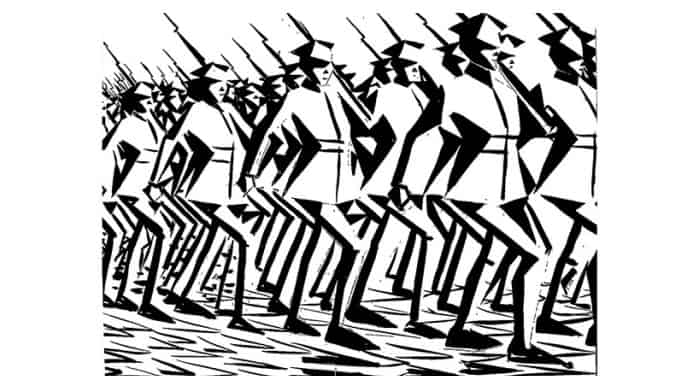 Elizabeth College is privileged to be able to perform ‘Oh, What a Lovely War!’ to coincide with the centenary of the end of the First World War, and to honour and pay respect to the 112 OEs who fought and lost their lives as a result of the conflict.  The College is delighted to invite anyone aged over 65 to a matinee performance in the College Hall at 2pm on Wednesday 31 January 2018, free of charge.  Alternatively tickets are on sale for the evening performances on Wednesday 31 January to Friday 2 February at 7pm. Tickets are priced at £3 for students and £6 for adults.

The production is a satire aimed at the cynicism of politicians as well as a tribute to the memory of ordinary soldiers in the First World War (and by implication in all wars). The production counterpoints brutal facts and statistics with the jaunty tunes the soldiers sang as they marched to their deaths in the trenches, including well-known tunes like ‘Keep The Home Fires Burning’, ‘It’s A Long Way To Tipperary’, and ‘Pack Up Your Troubles’.

The cast have worked hard to conquer a difficult and demanding script that is punctuated with humour, song, dance and moments of great pathos. Joan Littlewood and the Theatre Workshop who devised the original play in 1963 have created a piece of theatre that will have the audience laughing one minute then crying the next as they are forced to ask the question: do we ever learn anything from war? This question remains very relevant in the light of recent and ongoing conflicts today.

‘Oh, What A Lovely War!’ reminds us of the need to put real stories, that may be forgotten, on stage.
“Lest we forget”.

If you would like to come along, please phone the College reception during school hours (8am-4pm) to get your tickets.  There are only a limited number of seats available so don’t delay!