As Autumn closes in, it’s time to look back on an incredible ‘Summer of Sport’. As many were relaxing on holiday, Elizabeth College students continued to excel and enjoy great sporting success.  These stories represent hours of commitment and training on the part of our students and many hours dedication from their coaching staff. Thank you to the Guernsey Press for some fantastic coverage:

Bisley Shooting – age is no barrier on the range!

Cameron Chalmers adds Scottish U20 400m title to his collection

Students, staff and OEs from Elizabeth College were well represented in the recent Guernsey Granite Man  and Sprint Triathlon . The top three finishers in the ‘sprint event’  were Josh Thornton,  Dan Galpin, and Alex Rowe with Tom Stapley not far behind. The sprint event comprised of a 800m swim,  20km bike, 5km run

The first finisher in the full course was OE Dr Matt Dorrian  who completed the 1.9 km swim, 90 km bike ride and 21km  half marathon run.  Congratulations too go to teacher David Costen for completing this tough course. 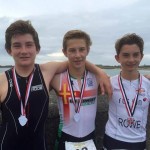