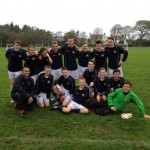 On a day of improbable victories, with Burnley actually managing to win a game, came a last minute winner against our Jersey rivals. A fantastic, gutsy, battling performance saw an unlikely victory against a very good side; probably the best the year 9 have played this year. In the same fixture in year 7 Vic College were victorious with a thumping 10-1 defeat.  Last year the boys achieved parity with a 1-1 draw.  Could this year we continue with our growth mindset and return a win?  We had to wait to literally the last kick of the game to find out. The game started off very evenly with both sides nullifying each other as they competed for dominance. The breakthrough came about half-way through the first half when EC won a free kick just outside the area. Skipper Miles Hardill promptly ran up and blasted the ball goalwards along a low trajectory, it cannoned off the inside of the keeper’s far post and flew across the line before nestling in the opposite side of the goal. EC withstood an immediate rally from their opponents and it looked like we were going to get to half-time unscathed.  Vic won a slightly contentious free-kick after Justin Maynard had accidently caught one of their players.  The Vic midfielder blasted to ball into the far corner to equalise. A half-time lift was needed from Krishnaldo and Tans Beckenbauer.

The second half started off much like the first but Vic took the initiative about half-way through.   From a corner, a well won header forced a save from Noah Whitmore but the rebound was put in. With the rain pouring down it would have been easy for our boys to give in and indeed I was in danger of being labelled a ‘Walley without a brolley’ , as the precipitation continued to descend.  EC won a free-kick from just inside Vic’s half,  another quality delivery from skipper Hardill saw confusion arise in the box and the ball missed everything apart from the strawberry blonde hair of midfield scrapper Fin Piper’s head, the ball implausibly found its way into the far corner of the goal.   Against a very good, physical side a 2-2 draw in such conditions would have been an admirable result, but our boys went one better.   With only a few seconds left, a long ball was pumped forward to Seb Shand, who was initially second best but through sheer determination managed to get ahead of the defender he was one-on-one with and toed it into the corner of the net.  It was literally the last kick of the game, as the ref blew immediately for full-time, and the crowd of 34 went wild.