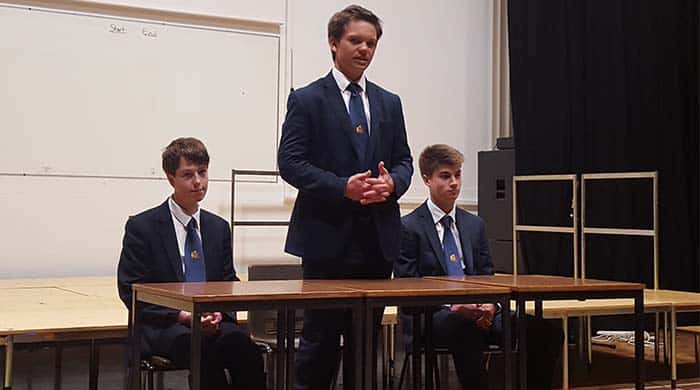 Elizabeth College’s senior team has represented Guernsey in the district finals of the Rotary Club Youth Speaks competition in Southampton on Saturday 10th March. Adam Le Poidevin, Ed Miller and Jack Le Tissier came third (from eight teams) with their talk: Trusting the Terminator, about the positives of a future reliance on artificial intelligence.

The competition, held at Richard Taunton College, saw strong performances from Christ the King School from the Isle of Wight, and Bishop Wordsworth which meant the Elizabeth College team narrowly missed out on progressing in this year’s competition.

History teacher Andrew Carey, who travelled with the boys said: “The Elizabeth College discussion on artificial intelligence was well received by the audience, it was a real shame that the boys missed out on progressing to the next stage of the competition. The Rotary Club Youth Speaks competition is an excellent opportunity for students to test their public speaking skills against their peers from other schools. The boys should be very proud of themselves.”