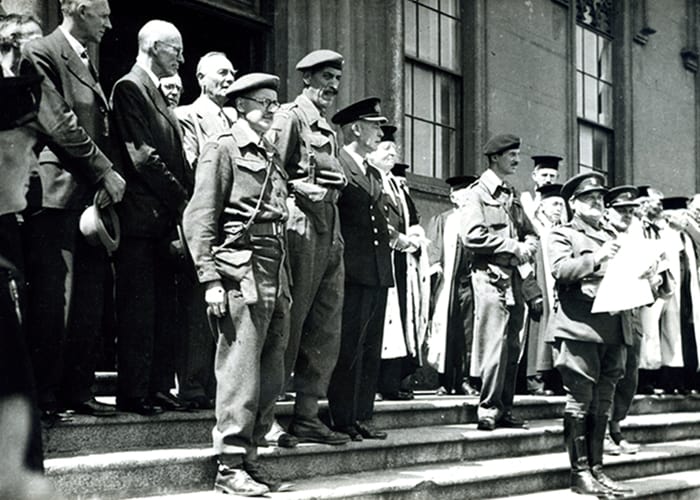 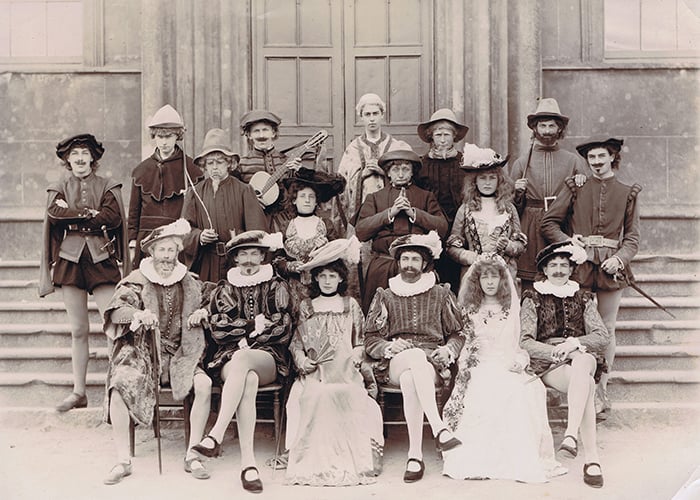 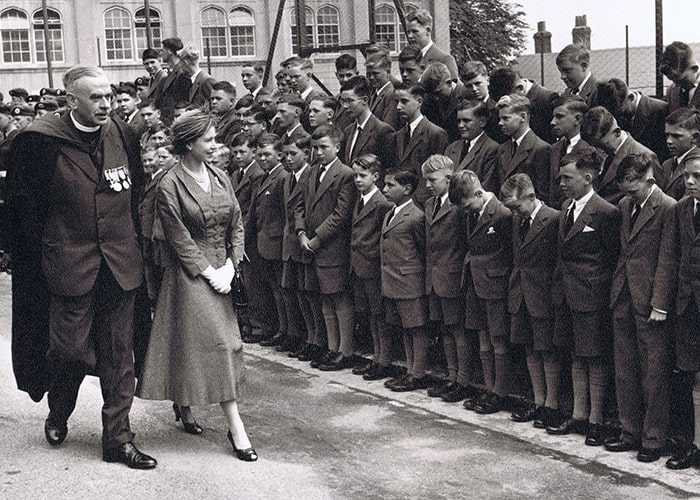 Founded more than 450 years ago, Elizabeth College was established in 1563 by royal command – an attempt to provide education in Guernsey beyond what we now term ‘primary’ level. The basic aim of Elizabeth I and her ministers was to train priests who would preach in island parish churches according to the principles of the Protestant Reformation. Such was the religious and political mayhem in the island that Elizabeth’s hope was a forlorn one.

For two and a half centuries, the school tottered on the brink of extinction. There were times when, although there was a headmaster on the pay roll, there were no students. In 1824, the island’s Lt Governor, Sir John Colborne, set up an enquiry into the state of the College, the result of which was the re-chartering which led to a renaissance of the school. A new building was commissioned – the largest civil construction project the island had ever known. It remains the centre of College life today and its outline still dominates the St Peter Port skyline.

During the 19th century, the school catered for many students whose parents were employed by the British government in far-flung outposts of the British Empire. A number of those same students themselves followed distinguished colonial careers. In the same era, the College was noted for its ability to prepare students for entry into the army and naval colleges on the mainland. The record of Old Elizabethans in the two world wars and other major conflicts of the past two centuries is wholly exceptional – no fewer than four Old Elizabethans have been awarded the Victoria Cross.

Ahead of Guernsey being occupied by German forces in 1940, the entire school was evacuated to Derbyshire and spent five years ‘in exile’. Students had little or no contact with their parents during the occupation of the island. The College itself was used by the occupying German forces as a headquarters building and the official liberation announcement was made to cheering crowds from the steps of the school in 1945.

A History of Elizabeth College was published in celebration of the 450th anniversary. This beautiful and comprehensively researched book covers the founding of the College in 1563, the 1824 re-chartering and College’s exile to escape the WWII German occupation of Guernsey, as well as many other fascinating events in the life of Elizabeth College. Further details including how to order the book at a greatly reduced price are available by clicking the History Book section below.

After the end of the Second World War, the population of Guernsey started to grow significantly and so did the pupil roll at the College. The College buildings were becoming overcrowded, and in January 1949 the Junior School was relocated to new, separate premises at Beechwood site in the Queen’s Road.

The facilities at the Junior School have expanded significantly in the last 60 years with the addition of purpose-built teaching blocks and sports facilities behind the refurbished Beechwood House.

The letter from the Committee of Enquiry into the State and Condition of Elizabeth College in 1824 appointed by His Excellency Colonel Sir John Colborne, K.C.B. made it clear that girls have never been excluded from attending Elizabeth College (point 23).

In September 2021 Elizabeth College was delighted to welcome girls into Year 7 for the first time and, understandably, it was a very proud moment in the school’s history. 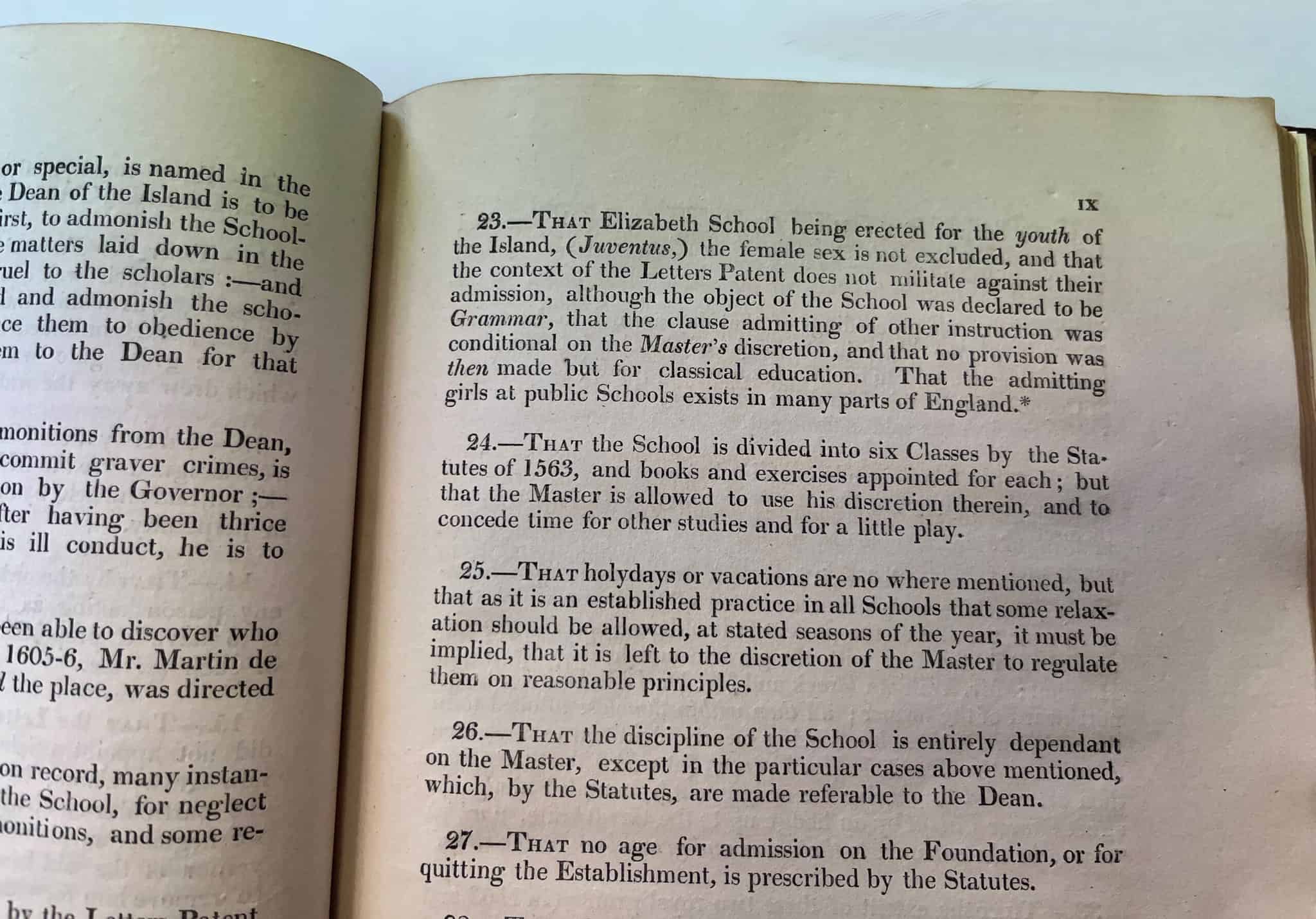 A HISTORY OF ELIZABETH COLLEGE

This beautifully illustrated and immensely readable book tells the fascinating story of four and a half centuries of life at Elizabeth College and has been written by Bruce Parker, an Old Elizabethan (4747), former master and retired BBC TV journalist. Bruce has uncovered an immense amount of material held at the College, in local archives and all over England which contribute to the story of the College and Guernsey itself. The intriguing story it tells has delighted, entertained and astonished readers with many unknown details and tales from the College’s eventful history.

“Bruce Parker has produced an illuminating portrait of an institution which has generated, in so many islanders, profound and enduring love and affection. This long-overdue work eloquently records the contributions made by many staff and the achievements of students, both in Guernsey and beyond its shores.” - Sir Geoffrey Rowland, former Bailiff of Guernsey.

The Elizabeth College Book of Remembrance, commemorating all those former pupils who died in the two World Wars, was placed in a niche in College Hall at the 11th hour of the 11th day of the 11th month in 2005, eighty seven years since the first Armistice ended the Great War.

The Book of Remembrance was created to commemorate the Old Elizabethans who died in the two World Wars supplementing the two war memorials in College Hall. Extensive research was undertaken into which old Elizabethans should be listed; this became a very complex task as there were many discrepancies between the many different sources of information. Including searching the College Registers, with their consolidated lists of the war dead, and the Commonwealth War Graves Commission website, which lists every known soldier, sailor or airman who was lost in the two World Wars. In the remembrance book, the College number, name, regiment, date of birth, date of death and age at death are listed.

Further research has recently been undertaken by Old Elizabethan Mike Martel, into the lives of those Old Elizabethans who died 'Pro Patria'. Drawing on regiment records, the National Archives, relatives and many other sources, he has complied a record of each of them including their personal school history, war records, and a photo where possible.

The two volumes are available to read here. 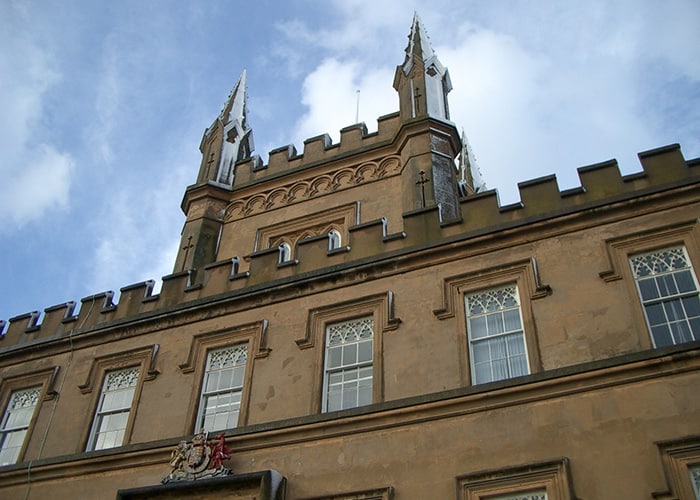 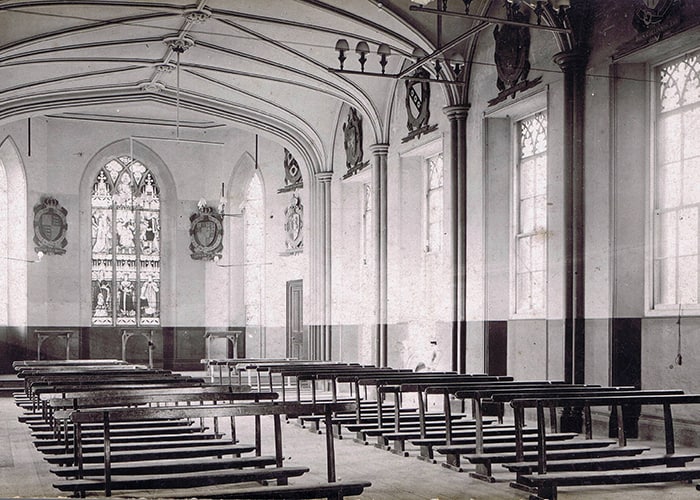